Intro| Decade '20| Decade '30 e '40| Decade '50| Decade '60| Decade '70| Decade '80| Decade '90| Decade '2000| ...until our days
The figure of Pilade Riello stands out from the numerous Italian entrepreneurs who, during the last century, contributed to the economic and technological development of the country in such a significant and extraordinary way. Thanks to his incredible intuition, spirit of initiative and strong determination, in 1922 Pilade Riello set up "OFR Officine Fratelli Riello" in Legnago (Verona - Italy) and a year later manufactured the first burner for bakers' oven.
Riello's strength is the result of its technological innovation capacities and the experience it has acquired in its 90-year history. 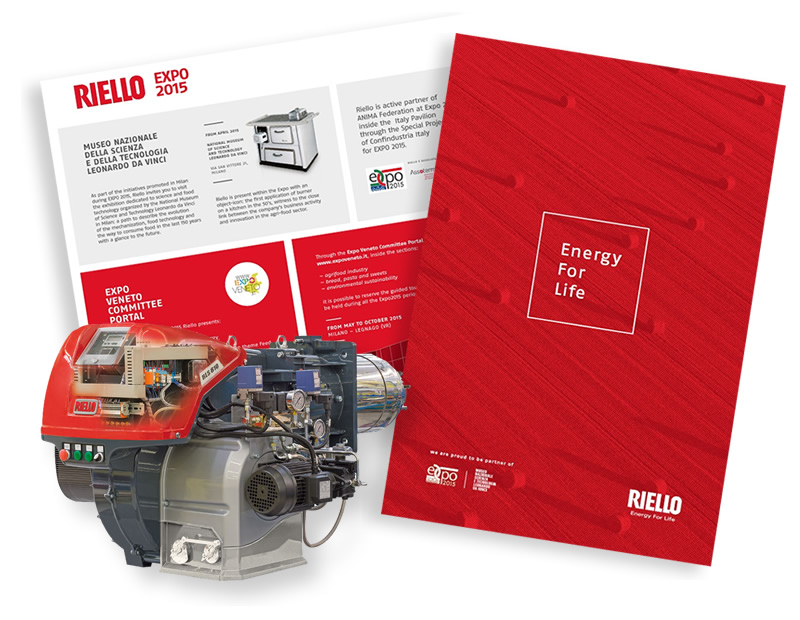 Beginning of production of boilers on the Chinese market 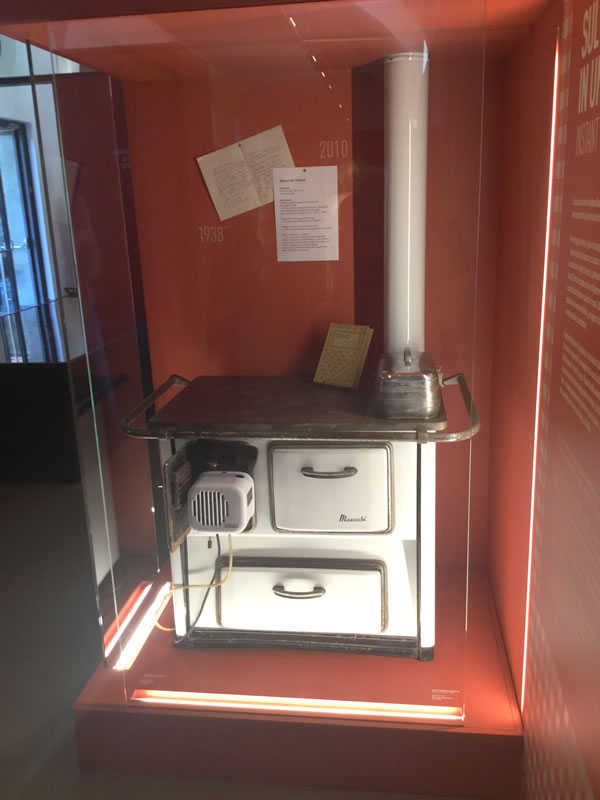 Riello reaches the primacy in Europe on monoblock premix burners at very low NOx emissions, reaching the maximum power of 1850 kW and 9 ppm NOx, with the RX 1800 SP/V model.
Riello joins  EXPO 2015 and brings its presence at Museum of Science and technology "Leonardo Da Vinci" with briket, a burner manufactured in 1950 which converted the traditional wood stoves.

The industrial structure of the Group is consolidated while new entrants to export markets.
In September Riello Trade Division was created with the task of supervising the sale of the entire catalog Riello that offers solutions and services that give customers complete satisfaction.

The Combustion Research Centre once more triples in size.

The work to expand the Center of Excellence is completed.

Over 500,000 burners manufactured and sold in only one year.

It has been started the conversion of the plant in Piombino Dese (Padua) for the production of solar panels and boilers that marks the entrance of Riello in the world of renewable energy. In 2009 begins the start up of the production site in China. 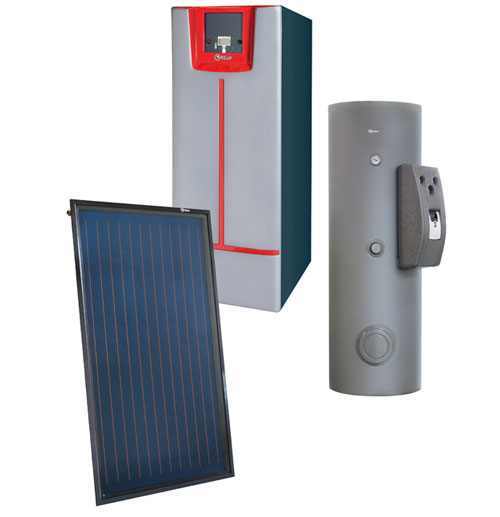 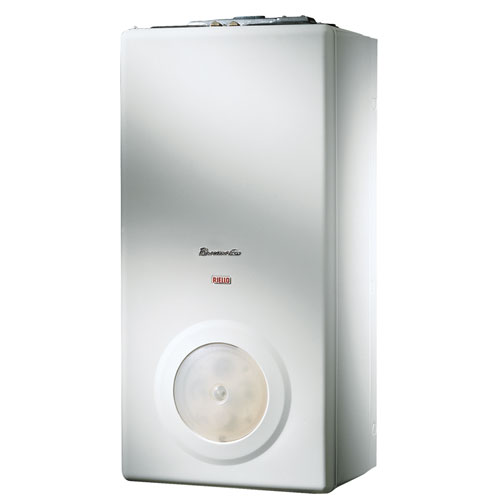 A new Division is born to oversee autonomy in the sale of the entire catalog. Renewed effort in communication as it was in the past, with the aim of making the public aware of the new committment and organization of the Italian brand  Riello: a Riello that offers solutions and services to grant  to the customers complete satisfaction.
A new plant for the production of boilers was built in 1993 in record time, and in 1997 starts the production of burners in a new modern factory in Legnago.

The new Center of Excellence for Product development and burner production is inaugurated in Legnago.

Focus on the core business: The Riello Burners brand is born.

It Is established a new holding company of the group called "OFR Officine Fratelli Riello SpA ", while the Company changed its name "RBL Riello Burners Legnago SpA" The financial O.F.R. includes all of the 10 group companies operating in Italy and abroad. The strong development of industrial activities of Riello, with new investments on products and sales organizations in Italy and abroad, will extend throughout the decade. In the meantime, Riello built  a new plant in Mississauga, Canada to serve the North American Country.

The Combustion Laboratory is opened in Angiari (Verona), for the research and producion of high power burners.

These were years of great expansion in foreign markets, with the creation of foreign subsidiaries in major European countries: England, Germany, France, Belgium, Switzerland. In Italy there has been a radical change in the sales with the merger of the sales networks and Isotherm Riello (1987) and the creation of a new brand that consisted  of a red triangle and four circles to symbolize the expansion of the company into new markets.  Expansion in communications by sponsor  the Benetton Formula 1 car for five years. Meanwhile, a complete Riello catalog with products for heating and cooling systems is started to be commercialized. Since 1986, within  few years, the company lauches on  the market, in addition to historical burners, about 140 product families. 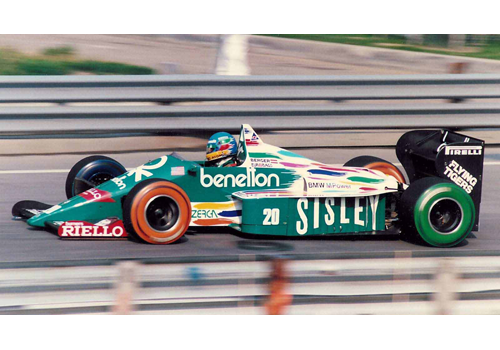 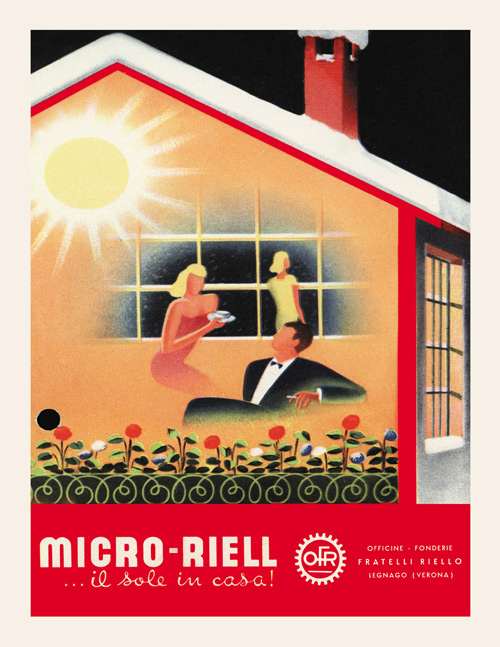 
Increase of sales in European and Extra Europe markets.

Burners are sold for the first time on the USA market.

Mectron is manufactured: the electronic burners of the 80's.

The 60’s open an important period of development either for the Company and for the general Italian society. These are the years where the TV commercials expanded and Riello launch a very popular and successful pubblicity on TV “Unca Dunca” to develop Riello brand.
With some important commercial strategies a strong Italian Distribution Network is established.

Riello Export is established in Padua (Italy) with the aim of coordinating and developing all acrivities of the foreign companies. 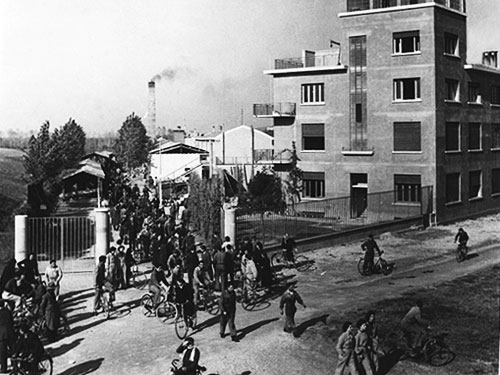 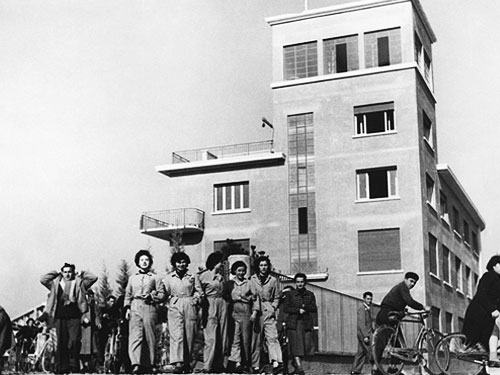 Production Facilities expanded to meet the demand for burners in thermal application.

Together with the burners production in these years Riello introduces other products such as air conditioning appliances. At first these new product line is imported from USA, then they started to be manufactures inside Riello’s factory.

The Special Tool Machines department is set up for the automation of the main components for the burners.

Due to a strong reduction in the availability of liquid fuels, new automatic special burners for use with coal are developed and produced.

Due to the crisis of heating sector, the Company addresses its production to Special Tool Machines for the domestic market.

Production gradually resumes its activity after the interruption caused by the Second World War and it is again directed towards heavy oil burners, especially considering the success of this fuel on the domestic market for residential and industrial heating applications. 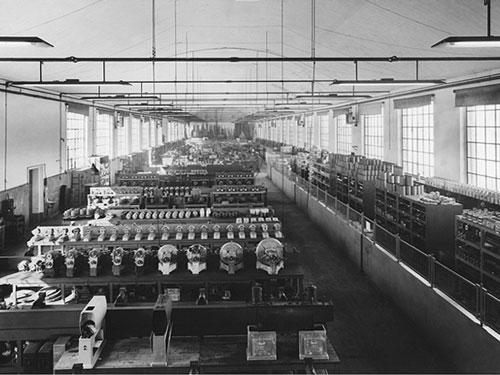 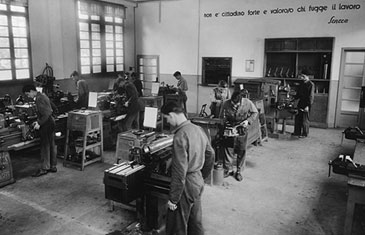 The company was founded after the end of the First World War by the owners as direct workers in a first craft workshop.

The idea of adapting the domestic oil burners, for long time already used in the U.S., becomes the main purpose of Riello; the first light oil burner is produced to be used in bakers’ ovens and for special applications.

The gasoil crisis sets the problem of adapting burners to the new heavy oil fuel. In terms of production this is an important innovation which involves much more complex research & development.

The first factory is built, the following years will see a steady development of the production due to the specific requirements of the domestic market.